Release: 2014
Genre: Adventure / Casual
Developer: WizarBox
Publisher: Reef Entertainment
Game Version: Full Last Release
System Requirements:
OS: XP, Vista, 7
Processor: Intel Pentium 4 2,2 GHz, AMD Athlon 64 2200+
Graphics: Nvidia Geforce 7600 or Radeon X1600
Memory: 2 Gb
Storage: 3 Gb
00
To favorites
Complaint
Captain Morgane and the Golden Turtle - point-n-click adventure game in pirate style, in which the maximum attention was paid to the elaboration of the backgrounds. Thanks to this, they turned out to be realistic, not empty, it is interesting to explore them in search of the necessary items, and also, they completely fall into the spirit of the Caribbean, which is important for a complete immersion in the ongoing twists and turns of the storyline of the single-player game Captain Morgana and the Golden Turtle.

The story tells about a young girl named Morgana Castillo, who has been living in a pirate atmosphere since childhood and absorbing the rules of life of sea bandits, in order to one day lead a detachment of those on her own and become a great captain in the open spaces of the Caribbean seas. She lives with her single mother Bonita, constantly helping her with the housework. But the protagonist is attracted by adventures and a pirate life, such as her father, a sea robber named Alessandro. The tragedy that happened - the death of her mother, when Morgana turns 8, pushes the girl on the way to make it easier for her. In the course of the passage of Castillo, he will go from a young girl to a real and strong captain.

The purpose of the first trip will be to search for a certain Golden Turtle, around which many events take place. The narrative is as non-linear as possible and the gamer has great freedom of action, many of which will be reflected in the ending. Present, standard for the genre, inventory. In it, you will need to collect items that are important for moving further along the locations, for their further combination and use on surrounding things.
Gameplay Trailer:
Screenshots: 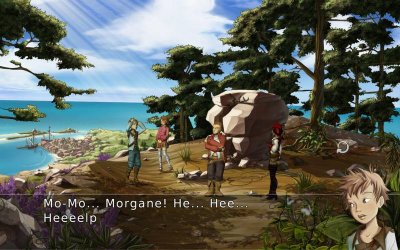 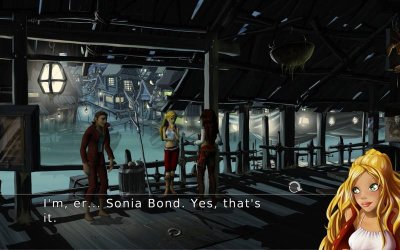