Release: 2022
Genre: RPG / Slasher / Adventure / Action / Casual / First person / Sandbox / Realism / Shooter / Platformer
Developer: mango tea
Publisher: mango tea
Game Version: v 1.0
System Requirements:
OS: Windows 7, 8, 10 (64 bit)
Processor: Intel Core i3-4340 / AMD FX-6300
Graphics: GeForce GTX 470 1Gb / AMD HD 5800 1Gb
Memory: 8 Gb
Storage: 10 Gb
00
To favorites
Complaint
Boulder Island is an open world survival simulator with action elements. It is done in a medieval-fantasy setting. The action takes place on an island inhabited by cursed pirates and knights that have turned into the undead. This is where the protagonist finds himself after a shipwreck. He is tossed ashore by the waves along with the wreckage of the ship. The hero must fight for his life and find a way to lift the curse on these lands. The game uses a first-person view. If you put the camera down, you can see the arms, legs and torso of the main character. He himself can walk, run, swim and jump.

In Indi-project Boulder Island, as in almost all games dedicated to survival, you need to monitor the stamina and health of the protagonist, and not to let him die of thirst or hunger. In this video game, you have to explore the island territory, collect resources, complete tasks, find provisions, look for weapons and armor. Part of the equipment according to the tradition for the genre can be crafted yourself. Some materials can only be obtained as a reward for killing monsters. At first the hero uses primitive stone tools. The game is not logically explainable, but you can buy more and more advanced equipment. You can put a helmet, outerwear, pants, boots, gloves, and shoulder pads on your character. He has an inventory of. There's also a pumping system. As you pass, the wayfarer improves his skills.
Gameplay Trailer:
Screenshots: 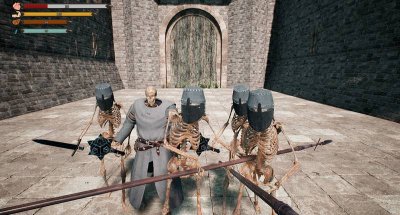 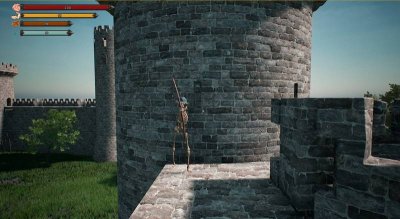